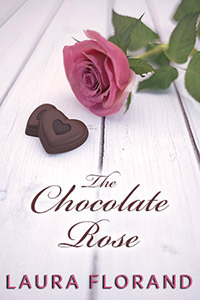 Top chef Gabriel Delange never forgave his old nemesis Pierre Manon for all the other chef had cost him.

And he most certainly couldn’t stand the sight of his own most famous dessert, the legendary Rose, claimed as Pierre’s own on the cover of his new cookbook.

But even Gabriel could hardly go through with a lawsuit when he learned the older chef had just had a stroke. Especially not when Pierre had one very cute daughter willing to be Gabriel’s victim instead.

As a child, Jo had seen her family torn apart by her top chef father’s obsession with his work. She had given years of her own adult life to trying to pull him out of depression, after he lost a star. Now a food writer, she might be fascinated with a chef’s work, but she knew how to guard her heart. She would never allow another chef into her life.

Unless he blackmailed her into it…

Welcome to the heat and sun of Provence, where jasmine and roses climb up old colored walls, where fountains play in ancient stone villages, and where even a beast can prove he is a prince at heart…

Okay, call me clueless but I didn’t even pick up on the Beauty and the Beast meta reference until I read a book review on Goodreads that mentioned it. It was just as well because I’m glad I didn’t have that for comparison at the back of my mind as I read this.

Having said that, I still appreciate the set-up that we were offered in the beginning. In exchange for Gabriel’s ‘silence’, otherwise known as him not filing any lawsuit against Jolie’s father who’d stolen Gabriel’s exulted creation, The Rose, and claimed it as his own, Jolie must work with him on his cookbook, otherwise known as a ploy to get back at his father, which totally backfires on him because he’s discovered he loves spending his time with his nemesis’ lovely daughter.

Gabriel has become another favorite hero of mine from Laura Florand’s Amour et Chocolat universe. He’s so close to my heart as Dom, from The Chocolate Touch, is. And on a good day, he eases smoothly into that number one spot. I love his character, his energy, his dedication. I love how he is just so out there, as it was mentioned by several characters in the book when describing him. He’s also open in a way that not many heroes in books are. It’s second nature to him to offer himself whole-heartedly for the things he loves most in the world, like his family, his craft, his love for food, and of course his love for Jolie. Jolie often describes him as one who doesn’t know how to slow down or even have a slight inkling that he might need to. And that works for me on so many levels because it’s not usual especially for a male protagonist and it speaks of how honest and bared his heart is.

I loved Jolie’s character as well, although not as much as I really adored Gabriel’s. Her issues with her father, especially after he’s suffered a stroke and having a star taken away from his restaurant, have been presented in a way that is completely logical and understandable. She once said to Gabriel that she’s the type of woman who does the dumping in a relationship and I didn’t really see her that way. Nevertheless, I understood later as it was explained how her mother’s separation from her father, or more like how her mother took her and her sisters to America after her parents’ divorce, has molded her outlook in life when it comes to relationships, particularly relationships with a chef.

The chemistry between Gabriel and Jolie were there from the very beginning, when there was some mistaken identity involved that ended with Jolie working as a staff in Gabriel’s kitchen, albeit for only a day. I love Laura Florand’s way of establishing that balance between sexual undertone and intimacy between these two. I particularly love that Gabriel loves inviting Jolie to his restaurant for meals. He prepares each food he presents to her, like an offering of himself, in a way. It shows his devoted personality, his caring and selfless side.

I also love the way that these two people seem to see each other for who they really are, what’s underneath their skins, what’s really in their hearts. Some of my favorite scenes are the ones that really showcase this understanding between them. For Gabriel, it was the way he saw what it was that Jolie was really feeling taking that train ride from his town back to her father’s city. For Jolie, it was the way she saw how beautiful Gabriel’s heart is, and all that that implies.

I also love the resolution of the conflict by the end of the book. It wasn’t contrived or forced. It was the perfect way to show the kind of people that these two characters are and how their relationship with each other have affected the way they see life.

Laura Florand is the international bestselling author of the Amour et Chocolat series (The Chocolate Thief, The Chocolate Kiss, etc). Her books have been translated into seven languages, received the RT Seal of Excellence and starred reviews from Publishers Weekly, and been recommended by NPR, USA Today, and The Wall Street Journal, among others. Four of her past five books have been recommended reads by Dear Author and two have been Sizzling Book Club Picks by Smart B*, Trashy Books.

Laura was born in a small town in Georgia, but the travel bug bit her early. After a Fulbright year in Tahiti, a semester in Spain, and backpacking in New Zealand and Greece, she ended up living in Paris, where she met and married her own handsome Frenchman. You can find out quite a bit more about those crazy adventures in her memoir, Blame It on Paris. She is now a lecturer in Romance Studies at Duke University. Contrary to popular opinion, that means she studies and teaches French language and culture, rather than romance. Fortunately, French culture includes French chocolate, research to which she is very dedicated. You can catch some glimpses of that research in the books, on her blog, and on her Facebook site, where you are welcome to join her and other readers!

Other books in the series: 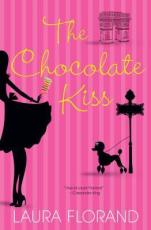 6 thoughts on “Review: THE CHOCOLATE ROSE by Laura Florand”

I would love to read your thoughts on this post. Cancel reply

Visit me on Goodreads

For The Love of Books Blog

Filipino in Cairo, for some reason.

tackling the world one word at a time

Love is not a triangle

A lady on a mission to read all the books...

There were books involved...
Amire Cosmetics

A Life Amidst Books

Reading is Definitely a Thing

The Broke and the Bookish