Every month, there are always new releases to look forward to and the more there are books, the harder it is (at least, for me) to keep track of all the beautiful books I want to get on my shelf. So I decided to start this monthly post where I spotlight new releases for the month so (1) I can keep track of all of them  and (2) share them with all of you, see if you’ve got the same line-ups on your TBR shelf.

Without further ado, here are the new releases that I’m looking forward to having this July:

Growing up on Forge’s streets has taught Kyra how to stretch a coin. And when that’s not enough, her uncanny ability to scale walls and bypass guards helps her take what she needs.

But when the leader of the Assassins Guild offers Kyra a lucrative job, she hesitates. She knows how to get by on her own, and she’s not sure she wants to play by his rules. But he’s persistent—and darkly attractive—and Kyra can’t quite resist his pull.

Tristam of Brancel is a young Palace knight on a mission. After his best friend is brutally murdered by Demon Riders, a clan of vicious warriors who ride bloodthirsty wildcats, Tristam vows to take them down. But as his investigation deepens, he finds his efforts thwarted by a talented thief, one who sneaks past Palace defenses with uncanny ease.

When a fateful raid throws Kyra and Tristam together, the two enemies realize that their best chance at survival—and vengeance—might be to join forces. And as their loyalties are tested to the breaking point, they learn a startling secret about Kyra’s past that threatens to reshape both their lives.

Georgie McCool knows her marriage is in trouble. That it’s been in trouble for a long time. She still loves her husband, Neal, and Neal still loves her, deeply — but that almost seems besides the point now.

Maybe that was always besides the point.

Two days before they’re supposed to visit Neal’s family in Omaha for Christmas, Georgie tells Neal that she can’t go. She’s a TV writer, and something’s come up on her show; she has to stay in Los Angeles. She knows that Neal will be upset with her — Neal is always a little upset with Georgie — but she doesn’t expect to him to pack up the kids and go home without her.

When her husband and the kids leave for the airport, Georgie wonders if she’s finally done it. If she’s ruined everything.

That night, Georgie discovers a way to communicate with Neal in the past. It’s not time travel, not exactly, but she feels like she’s been given an opportunity to fix her marriage before it starts . . .

Is that what she’s supposed to do?

Or would Georgie and Neal be better off if their marriage never happened?

She’s a tomboy. He’s the boy next door…

Charlie Reynolds can outrun, outscore, and outwit every boy she knows. But when it comes to being a girl, Charlie doesn’t know the first thing about anything. So when she starts working at a chichi boutique to pay off a speeding ticket, she finds herself in a strange new world. To cope with the stress of her new reality, Charlie takes to spending nights chatting with her neighbor Braden through the fence between their yards. As she grows to depend on their nightly Fence Chats, she realizes she’s got a bigger problem than speeding tickets-she’s falling for Braden. She knows what it means to go for the win, but if spilling her secret means losing him for good, the stakes just got too high.

Fun, original, and endearing, On the Fence is a romantic comedy about finding yourself and finding love where you least expect.

Cocktail waitress Sophie Dalton doesn’t exactly have a life plan. She’s perfectly happy being everyone’s favorite party girl. But when a Las Vegas bachelorette party goes awry and an uptight businessman mistakes Sophie for a prostitute . . . well, Sophie wonders if it’s time to reevaluate her priorities. Swearing off her thigh-high boots for good, Sophie slinks back home with damaged pride-and a jackpot of a hangover.

Yet what happens in Vegas doesn’t always stay there. On a trip to Seattle to open a new office, Grayson Wyatt meets his latest employee-who turns out to be the same woman he recently called a hooker. Wealthy and gorgeous, Gray is a man used to getting what he wants. And it doesn’t take long to figure out that smart, sassy, sexy Sophie is everything he’s been looking for. As their late nights at the office turn into hot morning-afters, they realize their Vegas misunderstanding may lead to the real thing . . . 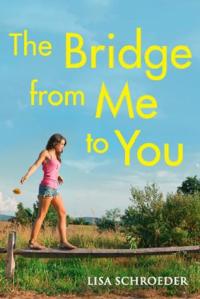 Title: The Bridge from Me to You
Author: Lisa Schroeder
Release Date: July 29, 2014

Lauren has a secret. Colby has a problem. But when they find each other, everything falls into place.

Lauren is the new girl in town with a dark secret. Colby is the football hero with a dream of something more. In alternating chapters, they come together, fall apart, and build something stronger than either of them thought possible–something to truly believe in.

I think in triangles. You think in straight lines.

I show you a table and make you believe it’s a chair.

Smoke and mirrors, sleight of hand, misdirection. I trick and deceive.

But most of all, I put on a good show.

The world thinks I killed a man, but I didn’t. Bear with me. It’s all a part of the plan.

She doesn’t remember me, but she’s the reason for everything. She’ll be my prize at the end of all this – if I can hold onto my willpower, that is. Maybe I’ll slip up a little, have a taste, just a small one.

So go ahead and pick a card. Come inside and see the show. Look at my hands, look so closely that you can’t see what’s happening while you’re so focused on looking. I’ll be destroying your world from right here in the spotlight.

You’ll never see me coming until it’s too late.

I’ve only got one heart, and after I’ve pulled off my grand deception I’ll hand it right to her.

So, sit back, relax, and let my girl tell you our story. You’re in for one hell of a ride.

***
When famed illusionist Jay Fields walks into her father’s law practice, Matilda Brandon has a hard time keeping her heart from pounding. With a non-existent love life, she wonders if she could ever have a chance with a man this sexy and charismatic. She knows she’ll never meet someone like him on her online dating site, that’s for sure.

Jay wants to sue a newspaper, however, he leaves with a new landlord and a rather smitten housemate instead. As the two form a bond, Matilda finds herself becoming a part of Jay’s crazy world of illusion and mentalism, where underground magic shows, casino gambling and secret vendettas abound.

Jay has a dark history, and Matilda isn’t sure if she should open herself up to such an enigma of a man. Is he really who he claims to be? And why does he keep so many secrets?

She doesn’t know it yet, but they share a common past. Jay has set a plan in motion and whether she likes it or not, claiming her heart has always been his ultimate goal.

On her nineteenth birthday, Princess Kelsea Raleigh Glynn, raised in exile, sets out on a perilous journey back to the castle of her birth to ascend her rightful throne. Plain and serious, a girl who loves books and learning, Kelsea bears little resemblance to her mother, the vain and frivolous Queen Elyssa. But though she may be inexperienced and sheltered, Kelsea is not defenseless: Around her neck hangs the Tearling sapphire, a jewel of immense magical power; and accompanying her is the Queen’s Guard, a cadre of brave knights led by the enigmatic and dedicated Lazarus. Kelsea will need them all to survive a cabal of enemies who will use every weapon—from crimson-caped assassins to the darkest blood magic—to prevent her from wearing the crown.

Despite her royal blood, Kelsea feels like nothing so much as an insecure girl, a child called upon to lead a people and a kingdom about which she knows almost nothing. But what she discovers in the capital will change everything, confronting her with horrors she never imagined. An act of singular daring will throw Kelsea’s kingdom into tumult, unleashing the vengeance of the tyrannical ruler of neighboring Mortmesne: the Red Queen, a sorceress possessed of the darkest magic. Now Kelsea will begin to discover whom among the servants, aristocracy, and her own guard she can trust.

But the quest to save her kingdom and meet her destiny has only just begun—a wondrous journey of self-discovery and a trial by fire that will make her a legend…if she can survive.

The Queen of the Tearling introduces readers to a world as fully imagined and terrifying as that of The Hunger Games, with characters as vivid and intriguing as those of The Game of Thrones, and a wholly original heroine. Combining thrilling action and twisting plot turns, it is a magnificent debut from the talented Erika Johansen.

Is there any book in this list that’s on yours too? Or do you have any new release this month that you’d like to recommend to me? I love getting recommendations of new books. What are some of your most anticipated releases this month?

2 thoughts on “Hot off the Press: New Releases this July”

I would love to read your thoughts on this post. Cancel reply

Visit me on Goodreads

For The Love of Books Blog

Filipino in Cairo, for some reason.

tackling the world one word at a time

Love is not a triangle

A lady on a mission to read all the books...

'Reading one book is like eating one crisp.' -Diane Duane

There were books involved...
Amire Cosmetics

A Life Amidst Books

Reading is Definitely a Thing

The Broke and the Bookish